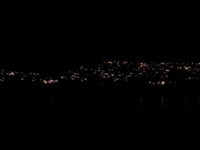 At first glance, the interplay of the image of the unchanging landscape, and the soundtrack charged with associations seems to result in the sound filling the "empty" image with meaning and the image in making the empty lives on a Saturday Night visible, giving them a new face. Seeing the installation at any given point of time during its duration, the picture and the dialogs and the music convey an ambiguous atmosphere. Viewers find themselves gradually slipping into the undefined terrain between the soundtrack and the image and start filling this ambiguity, this gap with new interpretations and meaning.

Camera, editing and soundmix: Blaffert&Wamhof
Video produced at USF Bergen, Norway, and postproduction realized with support of
ZKM | Institut for Visual Media at the Center for Art and Media, Karlsruhe, Germany.